We have implemented several changes that will enable you to diagnose and eliminate potential memory leaks more quickly and will make it easier to investigate problems associated with acquiring and releasing licenses.

If circular references are accumulated during the long period of work, this may result, for example, in the server cluster working process occupying the entire RAM or reaching a restart threshold. Another manifestation of a long-term accumulation of cyclic references can be that session data occupy all the space on the disk that hosts the storage.

We have developed two tools that can help you detect circular references. We recommend using them only during debugging and testing because they require considerable resources, which might adversely affect the execution of 1C:Enterprise operations.

First of all, we have implemented an automatic search mode for circular references. In this mode, when the platform detects a circular reference, it stops script execution and a dialog box of the following type pops up: 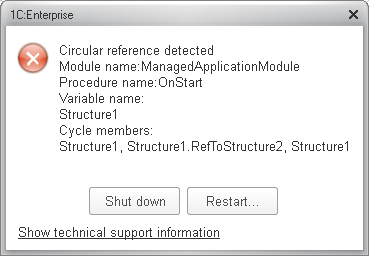 This dialog box lists all the variables, for which circularity is detected. For each variable, all the cycles, in which it participates, are listed (in terms of 1C:Enterprise script).

In this case, the circularity was caused by this script fragment:
You can enable this mode in different ways, for example: 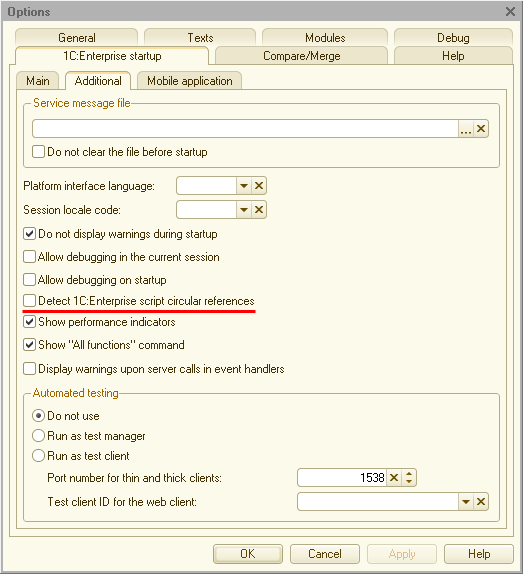 For more detailed and accurate diagnostics of circular reference presence, we have implemented a new global context method: CheckScriptCircularRefs(). You can use it to find circular references, for example, whenever you like, or in the procedure of your choice, or to analyze the variable that looks suspicious to you.

Thanks to this method, you receive information similar to that, which results from an automatic search for circular references: names of cyclic variables and a list of cycles for each of them.

Tracking of license acquirement and release

Another group of issues, which were difficult to detect until now, has to do with acquiring and releasing of licenses. For example, if the limit of administrator or developer licenses was suddenly exceeded, the investigation required some significant efforts.

We have implemented detailed logging of events related to licensing in the technological log. To this end, we use the LIC event.

Each time the platform attempts to acquire a license, it records the following data: license number, its recipient, whether it is a new license or an old one that is reused, license ID, license type, as well as the license keys and files that were reviewed and on the basis of which the license was acquired.

If you use HASP keys, their initialization process is logged. The type of the requested license and a list of available HASP keys are recorded.

Every time a license is released, the following data is recorded: license ID, the time when the object of the released license was created, license recipient, license type or key, as well as the number of employed software licenses.

We have implemented a periodic (every 20 minutes) verification of the invariability of computer parameters critical for the binding of software licenses. If these parameters undergo a critical change, the event is recorded in the technological log as LIC event. It contains the name of the license file, registration number, PIN code, type of license, the maximum number of users, and the list of critical hardware changes.