Development of tools for working with binary data

We have implemented a number of low-level tools for working with binary data. Now you can handle such tasks as:
Previously, the platform had a number of methods available for working with files and the BinaryData type. But they did not provide any easy way to analyze the internal contents or modify it. All actions were performed for all data at the same time. The only operation that could be done with a portion of the data is splitting a file into parts and putting it back together.

A specific example is the easiest way to demonstrate the purpose and interconnection of new objects. The example splits a WAV file into the same 1,000-byte parts.

The diagram shows the usage sequence for 1C:Enterprise script objects corresponding to the listing. 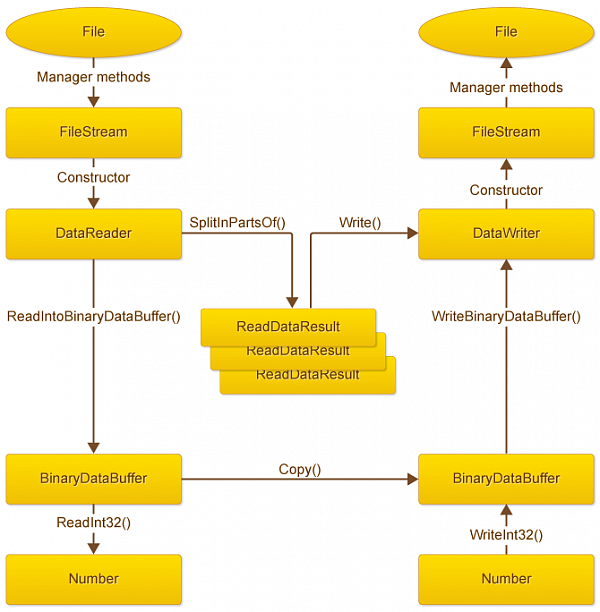 Example: Split a WAV file into parts
The basis for working with binary data is a group of new types, which can be referred to as "streams". There are three types of them: Stream, FileStream, and MemoryStream. The example uses one of them, FileStream, but the rest mainly operate in the same way.

Streams are intended for sequential reading/writing of large amounts of binary data. Their advantage is that they allow you to work with arbitrary amounts of data streams. But they provide only basic features, such as reading from a stream, writing into a stream, and changing the current position (seek).

Then, in order to have more extensive opportunities for work, DataReader (New DataReader(SourceStream)) object is created from the file stream. This object allows you to read the individual bytes, characters, and numbers. You can use it to read a string taking into account the encoding, or read the data up until a certain marker known in advance. This object has its "opposite", DataWriter, which is created in a similar way but writes data instead of reading. Because these objects read/write data from/to streams, they are also doing it sequentially, which allows you to work with streams of arbitrary size.

The file header is the BinaryDataBuffer object. This is an important object, but we will talk about it a little later. The body of the file is divided into parts of equal size (DataReader.SplitInPartsOf(1000)) that are obtained in the form of ReadDataResult objects. This type has no special features, and mostly just stores the read data.

Next, for every such part of the file in the example, FileStream for writing is created, and on its basis, DataWriter is created. Writing the data writes a new header and a new body to the stream, and closes it. At the end of the cycle, the result is a set of several files.

In the example, the file header is read into BinaryDataBuffer object (ReadIntoBinaryDataBuffer (44)). The main difference of this object from the above is that it provides not sequential, but random access to data, and lets you modify the data at any position.

All data from this object are entirely located in the RAM. Therefore, on the one hand, it is designed for analyzing and editing of not very large amounts of binary data. But on the other hand, it provides convenient options for random reading and writing of bytes represented by numbers, for splitting the buffer into several parts and combining multiple buffers in one, as well as for getting a part of the buffer of the specified size.

Turning a picture by 90 degrees can be used as an example to illustrate the capabilities of the binary data buffer.

Asynchronous methods are needed in order to be able to work in the same way in the thin client, as well as in the web client (because browsers use an asynchronous model).

In addition to the listed objects, we have also implemented FileStreamsManager that exists in a single instance and is available through the FileStreams property of the global context.

And for the sake of aesthetics and symmetry, we have added similar synchronous methods. In order to be able to simplify an entry, instead of a constructor with four parameters:
you can use a suitable method with one parameter:
Example of reading and writing a multipart HTTP message

In order to illustrate the new features for working with binary data, we would like to refer to two more listings. They illustrate the implementation of a task, which we were often asked about.