Tràng Tiền Plaza (TTP) is the largest shopping mall in Hanoi and includes a wide variety of restaurants and shops. The choice of a new system for managing sales was dictated by TTP’s strong desire to achieve top business results by automating as much of its system as possible.

In December 2012, TTP’s management selected software solutions based on the 1C:Enterprise 8 platform supplied by 1VS in Hanoi. The software system was to be deployed within just 40 days, in time for the trade center’s grand reopening.

In the new automation system, all sales transactions take place in the 1C:Retail 8 software solution. The data is then transferred on a regular basis to the 1C:Accounting 8 solution, which will be used by the accounting office so that it does not have to enter data multiple times, thus avoiding unnecessary work.

With regard to deployment, there were several advantages to the 1C:Enterprise 8-based solutions. The majority of business logic implemented in this software meets TTP’s regulatory requirements, reducing the amount of customization work required for the software. In addition, the units deployed were easily adapted to meet specific TTP management requirements such as:

In addition, if the problem occurs in both the primary and backup systems, the deployment team included the option for workstations still functioning normally to run standalone (offline).

Hanoi-based 1VS has carried out the automation of 30 workplaces. The performance capacities of the system allow one to expand the number of workplaces to 100 without having to customize the software, thus keeping the entire system’s processing times at a minimum.

Mr. Tran Thi Le Dung, the project manager and general accounting officer at Tràng Tiền Plaza, has this to say about the software system: "Based on the same 1C:Enterprise 8 platform, both the accounting and retail parts of the software can synchronize data with each other, which shortens the data transition time from sales to accounting. This unique capability of the software automatically posts most of the business transactions and calculations in the final (pivot) window, thus saving time and minimizing errors. In short, the coordination and enthusiastic support of 1VS during the project has allowed us to deploy the software system and have it fully operational according to schedule."

The Director of TTP, Mr. Tran My, also commented on the 1VS project at the deployment stage: "My main task in this project was consensus during the deployment process on all sides: the leaders of the participating parties, the expert deployment team and the users. Thanks to the positive attitude to the work and professional working methods, the project was completed well before opening the doors again to visitors to Tràng Tiền Plaza."

This is one of the few projects in Vietnam where open source software was applied: the Linux operating system for the application server and PostgreSQL as the database server.

1VS not only carried out the deployment but also continues to provide technical support to TTP.

Technical Parameters of the Project

Tràng Tiền Plaza was built in 1999, in Hanoi, Vietnam at a previous department store location. It is a major commercial center located on the Hoan Kiem Lake. Built by a French architect, it is a six-story building with three façades and more than 20,000 m2 of retail and office space, including modern equipment according to international standards. With the beautiful views of Hoan Kiem Lake, this is definitely one of the architectural highlights of Hanoi. 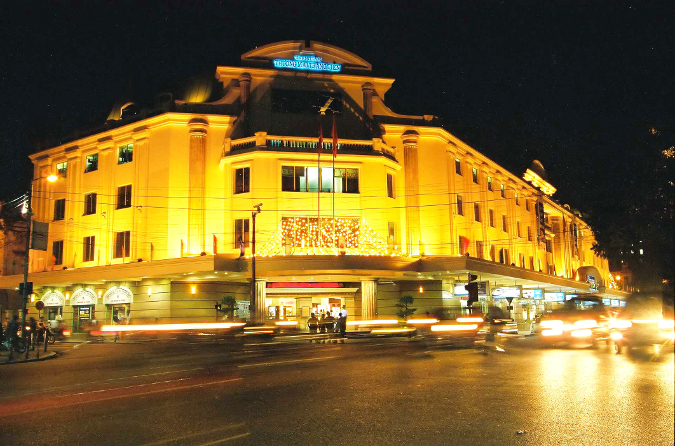 Established in 2006 in Hanoi, Vietnam, 1VS JSC is a solution partner of 1C Company and operates as a developer, integrator and distributor of software solutions for business automation on the 1C:Enterprise 8 platform.

1VS offers software solutions for a wide range of commercial enterprises, non-commercial organizations and personal use. There are over 3000 companies in Vietnam using 1VS solutions in their everyday business operations.

First BIT implements a new system based on 1C:Enterprise in Nigeria