The 1C Company released the latest version of the1C:Enterprise 8.3 technological platform. This new version provides significant improvements for the most requested platform features.

Development and enablement of cloud technologies

Improved scalability, fault tolerance, and load balancing of server clusters. New load balancing architecture for server clusters, with automatic balancing between the cluster nodes based on available servers, fault-tolerance criteria provided by the administrator, and real-time analysis of server performance. Fine-tuning of load balancing for individual cluster nodes is available. Increased options for management of memory allocation for server working processes, this increases the cluster tolerance towards potential human-initiated malfunctions.

Licensing and external session management services. The licensing service distributes client and server software licenses, which eases the deployment of the server cluster in the virtual environment, as well as dynamic allocation of server resources. The external session management service informs an external system about attempts to open or close a session and receives responses that grant or deny permissions. This allows administrators to limit the number of simultaneous user connections to infobases and keep track of infobase usage time. A web service provides interaction with the external system.

Support of secure SSL connections and certificates for all Internet protocols as well as platform features based on these protocols. For example, the web services and the thin client now work over secure channels.

Background infobase restructuring. This new feature minimizes the downtime required for application updates. While the previous versions required pausing user work for the entire infobase update period, in this new version the majority of changes are applied in the background. A short downtime is then required for the final update step. This approach greatly reduces the total downtime of the system and increases its availability, which is extremely important for cloud services and large-scale configurations.

Background restructuring can be performed incrementally and paused, which frees the computing power during peak-load periods, thereby leaving nights and holidays for system updates.

Security profiles. Service providers that provide Internet access to 1C:Enterprise solutions developed by third parties cannot thoroughly test the solution reliability. At the same time, they have to provide seamless access to their services and to other solutions included in these services. In 1C:Enterprise version 8.3, security profiles are implemented to facilitate this task. They prohibit application-initiated actions that can impact the functioning of the entire server cluster or the entire service, such as:

Automatic update of the thin client via the Internet. This option reduces the effort required to update remote users' software. Previously, automatic update was only available in the local network.

1C:Enterprise mobile platform is a technology for creating applications for tablet computers, smartphones and other devices that run Android or iOS. It includes: 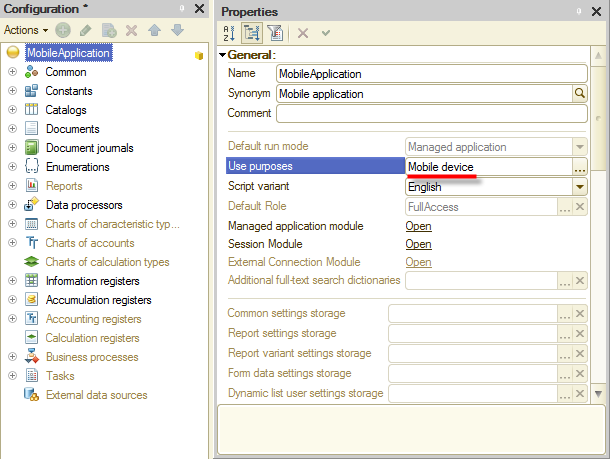 The development of mobile applications utilizes standard 1C:Enterprise platform tools and the available functionality is a subset of 1C:Enterprise functionality. Therefore, developers can reuse the code and business logic from their desktop solutions and implement standard integration techniques. Mobile applications run on desktop computers with Windows or Linux operating systems.

The mobile platform supports multimedia and location-based services. You’re able to obtain and use geographical location data and the postal address that matches the location directly from a mobile application, as well as take photos and record video and audio files that will be stored in the infobase.

Mobile applications are able to run in the offline mode, storing their data on the mobile device. At the same time, you’re able to add interaction with any back-office system using standard 1C:Enterprise integration tools. 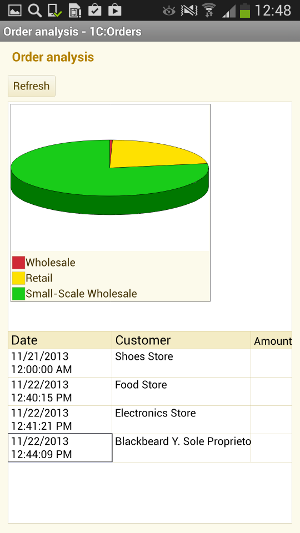 For more information on the mobile platform, see Working on mobile devices.

Client applications support both file and client/server modes. X86 and x86-64 versions are implemented. In 1C:Enterprise 8.3, application developers and infobase administrators are now able to work in Linux environment, not just users.

The previous 1C:Enterprise versions required a dedicated Windows computer for administering a server cluster because the administration features were based on Windows tools.

The administration server is a cross-platform application intended for passing control commands to a single 1C:Enterprise server cluster. It runs as a console application, Windows server, or Linux daemon.

The command-line tool is intended for sending commands to the administration server and for displaying data received from the server. It’s also a cross-platform application. The tool supports the entire set of commands required for administering server clusters. 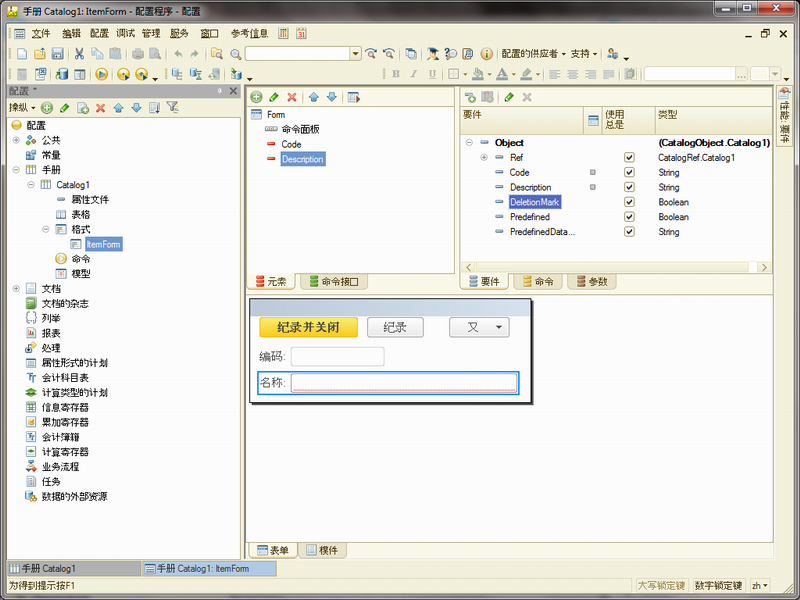 In 1C:Enterprise 8.3, two delivery and licensing options are available: standard and corporate.

Some of the new features that are only demanded by corporate users and companies that provide access to 1C:Enterprise applications in the Internet service mode are implemented in the 64-bit corporate version of the 1C:Enterprise server. These features include:

All of these features require a corporate license, which is twice the cost of the standard license for a given number of users.

Besides the listed features, the new version introduces many other improvements, including those based on partner feedback. The final release of version 8.3 was preceded by early access versions 8.3.1 and 8.3.2 together with a thorough functional and load testing. The testing of early access versions was performed by 1C specialists, franchisee partners, and application users. We’d like to express our sincere gratitude to everyone who assisted with testing 1C:Enterprise 8.3.

Upgrade to version 8.3 is free for registered 1C:Enterprise users and 1C partners. Switching to version 8.3 does not require training for users who previously worked on version 8.2 because the general platform concept remains unchanged.

All documentation is available to download free of charge.