The mobile client is one of the platform versions intended to be used on mobile devices. A mobile application built using this platform version can interact with infobases online similarly to platform client applications that are run on desktop computers.

If we draw an analogy with a platform for desktop computers, one could consider the mobile application similar to a thin client which interacts with an infobase published on a web server. 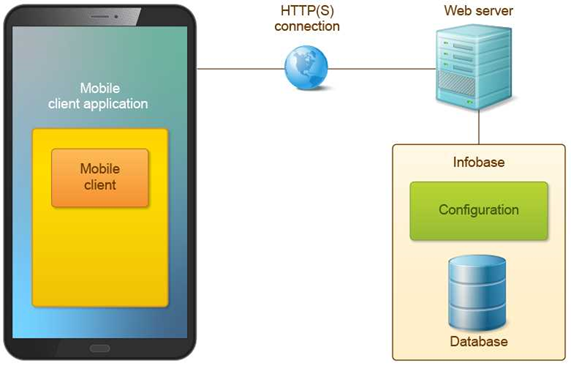 Forms developed for 1C:Enterprise desktop version are by default edited by the mobile client in a way enabling a user so far as reasonably practicable to easily operate the same using mobile devices with small screens.

For instance, a mobile client allocates more disk space for the most important and material form elements, including but not limited to, dynamic list table in the list form or spreadsheet document in the report form. Form elements which are not deemed material are allocated less disk space and thus placed into collapsible groups, etc. A similar approach applies to the most significant columns which exist in a list, for instance, ID or Date.

Moreover, the mobile client expands horizontal groups vertically, if these fail to fit the screen width. It is neither acceptable nor convenient to scroll a form on a mobile device horizontally.

To make this transformation smoother, a developer needs to specify further form element properties tailored to the mobile client and eliminate specific and unconventional interface solutions. In other words, some kind of enhancement is required. However, it is much simpler than the development of a dedicated and fully-featured mobile application.