The major features of 1C programming language are:

Therefore, modules that contain 1C programming language are only used in certain situations that might occur at run time. These situations are called events. Events can be related to the functionality of applied solution objects or to the applied solution itself.

For example, the functionality of the applied solution object Catalog includes a set of events. One of them is BeforeWrite. 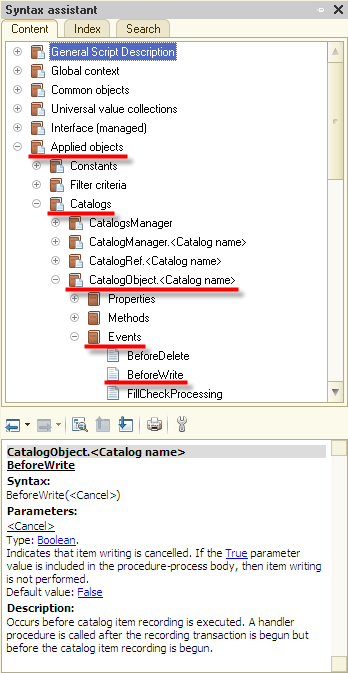 This event occurs before the catalog item data is written to the database. A developer can use 1C programming language to write an algorithm that checks whether the data entered by a user is valid. By adding the algorithm to the appropriate module, the developer ensures that every time a user attempts to save a catalog item the platform will run the algorithm for checking whether the user filled all mandatory catalog attributes.

1C programming language includes a large variety of objects. Of course, applied objects form the most essential object group because they are used for describing business logic algorithms. 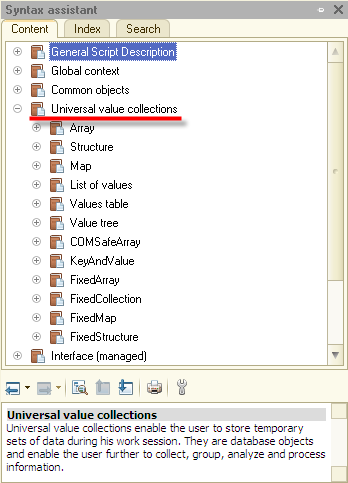 Let us briefly review their functionalities.

A numbered collection of values that can have any type. You can access an array element by its index. An array element can be an array itself, which allows building multidimensional arrays.

A named collection that consists of key-value pairs. Keys always have string type and values can have any type. You can access a structure element by its key (i.e. by name). Structures are intended for storing a small number of values where each value has a unique name.

A collection of key-value pairs, similar to a structure, with the following difference: keys can have almost any type.

For example, you can use a list of values for selecting a specific document from the list of documents generated using a complex algorithm.

An object wrapper over multidimensional SAFEARRAY from COM. COMSafeArray is used for creating and managing SAFEARRAY instances for exchanging data between COM objects.

An array that cannot be changed. It is filled by the platform during the initialization of objects of this type. Alternatively, a developer can fill it using the array constructor.

Developers can use the text and module editor for writing or editing 1C programming language. The editor provides handy tools for writing, editing, and performing syntax checks.