The following table summarizes the update options available for each metadata object.

Note that scenarios 1, 3, and 4 seldom require modifications of their update rules. Scenario 2 is more complicated because automatic rule selection makes no sense, but the platform can find all of the changed object properties, leaving the final choice of the update rule to the customer.

There are two ways to add vendor support to your configuration:

If the latest configuration version is 4 and the update is created for version 2, you cannot use it to update version 1 and version 3. This limitation is necessary for the correct processing of changes that negate each other. If a vendor increased the length of a string attribute in version 3 and reverted to the original length in version 4, this change is not included in the update from version 2 to version 4 because the string length is the same in both versions. If this update file is applied to version 3, the string length will not be reverted, which is incorrect.

Configuration update files have a small size because they only store the changes and because they use data compression. They are optimized for downloading through low-bandwidth channels but they provide less update flexibility than .cf files. The rest of the update process is identical for both .cfu and .cf files. 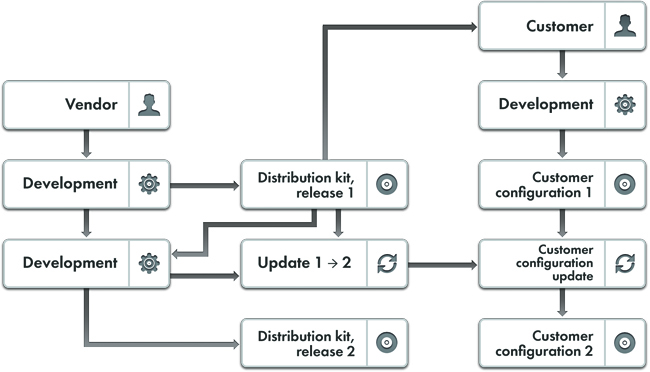 The customer can modify the update algorithm by setting support rules for each metadata object. They might need it if they want to make all further object modifications themselves and they are no longer interested in new object versions provided by the vendor. In particular, this scenario can be used if they want to delete the object from their configuration. Three metadata object support rules are available:

The following figure describes the support rules (both default and available to customers) that match various delivery rules. 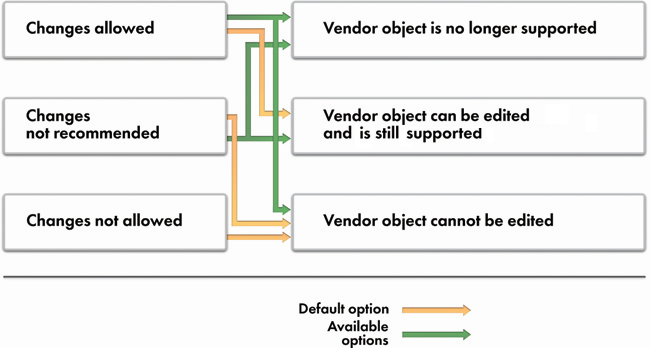